So, you’ve decided that video analysis will be beneficial to you or your club. You’ve checked out the market and decided on Nacsport. Good for you!

You’ve chosen one of the most powerful pieces of sports analysis software available on the market today. Now, you only have one decision left to make… which version of Nacsport to invest in.

On the other hand, maybe you are already a Nacsport user who’s now considering upgrading to the next level. But your hesitant. You’re asking yourself, “Do I really need all those extra features?”

Well, this article (and the series of articles which follow), is for you!

We’re going to take you through each of the software packages available from Nacsport and we’re going to highlight the main differences between each level. Hopefully, this will allow you to make an informed choice.

Click here to read Part 2 in this series: Basic+ vs Scout+

First off, we’re going to talk about the Basic and Basic Plus packages. Strap yourself in and let’s begin. It’s going to be a biggie!

Let’s begin with one of the most elementary features of video analysis software. The ability to register actions when watching a video so that you can quickly and easily recall them for review later.

With our Basic program you have the ability to do just that. See a shot on screen? Click the “shot” button to register it on video. We give you 25 fully customisable buttons to play with in the Basic package. We call these buttons Categories.

In the Basic Plus package you are given 50 buttons to play with, and this time you can relate them to each other by adding what we call Descriptors. You can still register a “shot” but what if you connect this to a player? Was it on-target or wide?

Allocate all these descriptors to separate buttons and you now have a register which automatically reads “shot by John Smith, on-target, in the 36th minute, 3 out of 5”.

Straightaway you can see that you have the basis for a much deeper analysis. Do you need this depth? That’s for you to decide!

Related to Categories and Descriptors, we need to talk about the data matrix which is only available in Basic Plus.

Simply put, this is a visual representation of your button presses when registering actions within Nacsport. For example, you have a “shot” row and an “on-target” column.

Look for the intersection between these two and you can see all the actions registered there and then access those specific points on your video.

Ok, let’s talk about the types of video you can work with.

In Basic, you have two basic ways of working with videos. Firstly, you can import a video into Nacsport for registering whilst you watch. Secondly, it’s possible to record action live and register actions to the program in real-time.

Basic Plus also hands you the ability to merge videos. This means that if you have two separate video files with two separate analysis, you can join them together to create one seamless video which contains all your data in the file.

Whilst you can merge video in Basic, it is impossible to merge the data files.

Both versions of Nacsport have a dashboard, a place where you can get visual representation of your analysis. You want a graph showing how many shots on target your team has had on target compared to the opposition? You can create it here.

The big difference between Basic and Basic Plus is that, with the older brother you can use Descriptors as well as Categories, which allows you to get deeper into your analysis.

While Nacsport Basic is a powerful tool in it’s own right, it has limited options for sharing or importing data from other applications.

Basic Plus, on the other hand, adds XML files into the mix. In a nutshell, this means that you can share data easily with users of other programs, or import their data into your machine for analysis, such as InStat or Hudl Sportscode analysis.

From Scout Plus onwards you have the ability to import native .TLcodes, but don’t worry about that at the moment, we’ll talk about in a later post.

Both of the basic versions of Nacsport give you the power to create beautiful presentations and informative videos with fantastic visual effects.

Maybe you want to simply add a bit of ambient music to add some atmosphere to a video. Maybe even stick Ride of the Valkyries on there to get the team worked up before a game!

There’s no getting away from it, for many non-professional users, price will be one of the key considerations when it comes to making this choice. We know that video analysis software is expensive but, at Nacsport, we pride ourselves in giving you more bang for your buck than any of our competitors.

Unfortunately, we cannot give you exact figure in this post, as that will depend on the currency you are using. We would suggest that you click here  to check the price in your country.

That being said, let’s look at the different purchase plans that we offer for Nacsport Basic and Basic Plus.

+ mandatory yearly payment after the first year for support and update services. 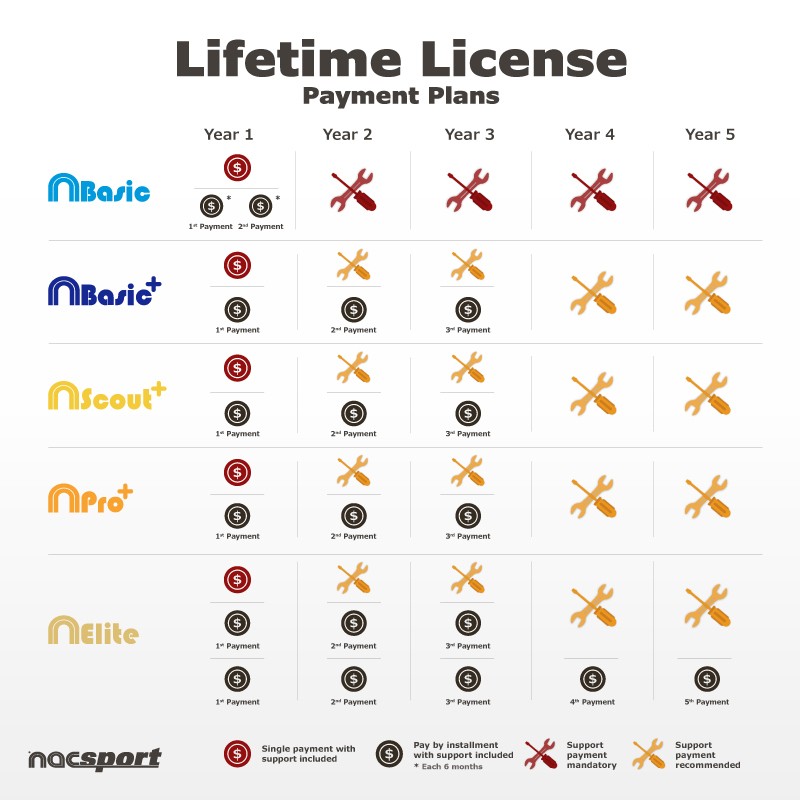 Ok…let’s see if we can clarify this a bit more.

With Basic, you effectively buy the license and never have to pay for it again. However, there is a mandatory yearly payment to keep the software running. This annual payment includes our support and update services.

On the other hand, with Basic Plus, when you buy your license, it’s yours. You own it for life, nobody can take it away from you and it will continue to work until the software becomes obsolete.

However, we cannot guarantee that the software will work forever. Technology evolves quickly and it is impossible to foresee issues such as conflicts with other programs and changes made to operating systems.

For this reason, we suggest that you take advantage of our support and update service, which we feel is a reasonable price for what you get. We update and improve our software several times per year, adding features

and adapting the software to the evolution of technology. Also, you have the added bonus of having us at hand if any unforeseen issues arise. Call us and we’ll deal with the problem.

We believe this service is well worth the money.

So…there you have it, a comparison of some of the major differences between the two Basic versions of Nacsport.

We can’t decide which one is best for you, only you can do that. But don’t worry, if you decide to take Basic and then decide that you need a program which is more powerful. It is very easy to upgrade your licence.

Next time in this series we’ll be comparing the differences between Basic Plus and Scout Plus.

Nacsport Dashboards: Everything You Need to Know