They've become one of the most recognisable teams in the MLS, scooped 2 national championships in under a decade and made at least the semi-finals of every Canadian championship since 2012. Clearly, the club is doing something right. And with the Impact’s strong commitment to nurturing young talent, we wanted to find out what. Who better to ask than Academy analyst; Maxim Chalier.

When and how did you discover/begin using Nacsport? Were you using any kind of software before?

I first heard about Nacsport in October 2018 when I received an email from Arka Majumdar introducing me to the software.

And yes I was using Sportscode (and Longomatch) before, but we found Sportscode too expensive for our Academy users and decided to try Nacsport. We weren’t sure at first but decided to go for it - which turned out to be a good idea.

All our academy teams use Nacsport, that’s 4 squads in total, so I work with around 80 players on my own.

Approximately, how many games do you analyze every week?

I'm analysing every U19/U17/U15 games and sometimes the U14 games so I'd say at least 3 games per week. Sometimes we play back to back so I’ll have 6 games to watch and analyse. 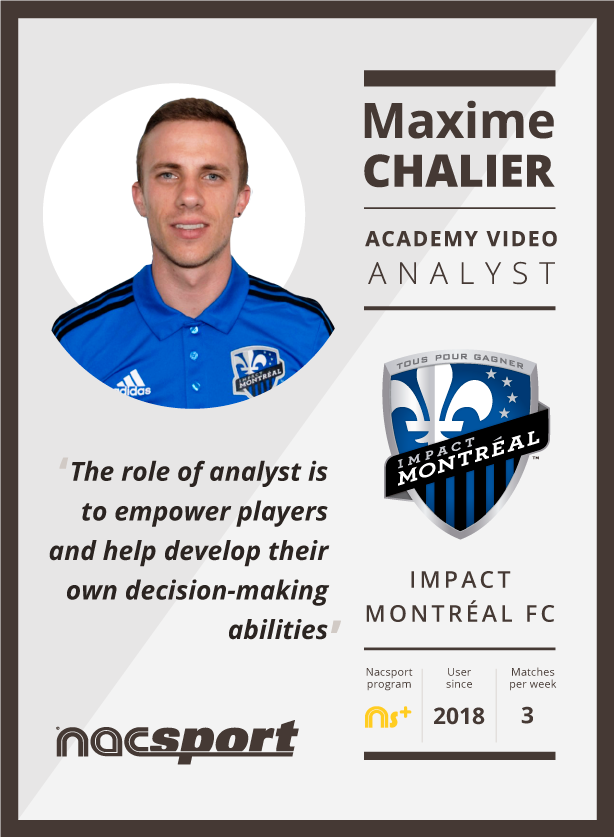 How do you use Nacsport? What does a ’typical’ analysis involve for you?

I use Nacsport to analyse games live whenever I can, (weather and location permitting), then create individual clips for each player and team clips for the coach to use later.

Before a game, I know exactly what every coach is expecting of his team "tactically" (game plan) so I'll prepare a template for each team (with player pictures) and specific buttons to tag exactly what they're looking for.

Do you work in real-time during games? If so what kind of information are you sharing and have you seen any benefits?

Yes I try to work as much as possible in real-time, first to provide rapid feedback to coaches but also to save time on my own more complete analysis later. When I watch matches a second time I’ll often spot situations I missed live.

How many people do you work with - as part of your analytical team and who do you report to?

I'm the only video analyst working for the academy. I report to the head-coaches of each team, as well as the Academy director.

Do you look at opposing teams?

Sometimes, if we feel we need to, we analyse rival teams, but not very often.

Are you achieving your analytical goals? What would help you be more effective or what frustrates you about your work?

Sometimes I feel like I'm getting lost in my workload. I’ll often begin several projects at once and struggle to complete them, so I'm probably setting too many goals.

I must be more realistic with my time. It's only been a year since I started working as an Analyst and I'm still learning everyday.

Have players and coaches ‘bought-in’ to your analytical work?

So far I'd say yes. But from the beginning of next season ​I will change my working methods to focus more on individual development of players through video. My ratio of individual to collective work will become 70-30.

Do you use any other tools in your analysis or presentations? (KlipDraw, Tag&view, Sharimg)

I use KlipDraw to highlight some of my video clips. It helps me add value to our message to the players. It’s a good tool.

I think that our role as video analyst is the future for the development of new football players.

The game has evolved so much over recent years, it’s always getting faster and all the players now are real athletes.

So I think the difference between a good player and a truly world class player will be their decision-making and ability to process information.

Personally, I see analysis as a huge help in developing decision-making.

Nacsport helps us develop as a team and encourages younger players to make better decisions.