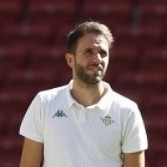 Daniel Muñoz, tactical analyst at Real Betis for several seasons, collaborates with Nacsport to analyse some of the best soccer teams in Europe. This week he talks to us about Lille OSC and discusses the tactical supremacy of this French team who have really come into their own over the last three seasons.

Lille OSC are currently in the process of consolidating themselves as one of the top teams in France and Europe.

For three consecutive seasons they have been moving amongst the elite with a 2nd place finish in Ligue 1 in the 2018/19 season guaranteeing them a place in the Champions League. The following season, a place in the 2019/20 Europa League was secured by placing fourth in the league, which was eventually suspended due to the Coronavirus crisis, just one point shy of a Champions League spot.

At the time of writing, they are sitting 2nd in France’s top league, right behind PSG.

Before this, they spent years generally floating around mid-table with no European competitions in sight. So what are the secrets to their current run of form? Could it be the tactical presence of manager Christophe Galtier? Let’s take a look...

At the time of writing, Lille have conceded the fewest goals in Ligue 1, 8 goals in 12 games, and have the second best goal average. With only 1 defeat in the league, this is an extremely competitive team who are difficult to beat. The squad combines experience with youth and are one of the youngest squads in Ligue 1 with an average age of 24.7 years between them.

Here are some of their latest results:

Europa League Group H standings as of the 2nd of December, 2020

Versatile and Variable Systems and Formations

This is a team for whom formations are merely a starting position. From a theoretical 4-4-2 in both attack and defence, they vary their systems throughout a match and depending on the situation and opponent they face. 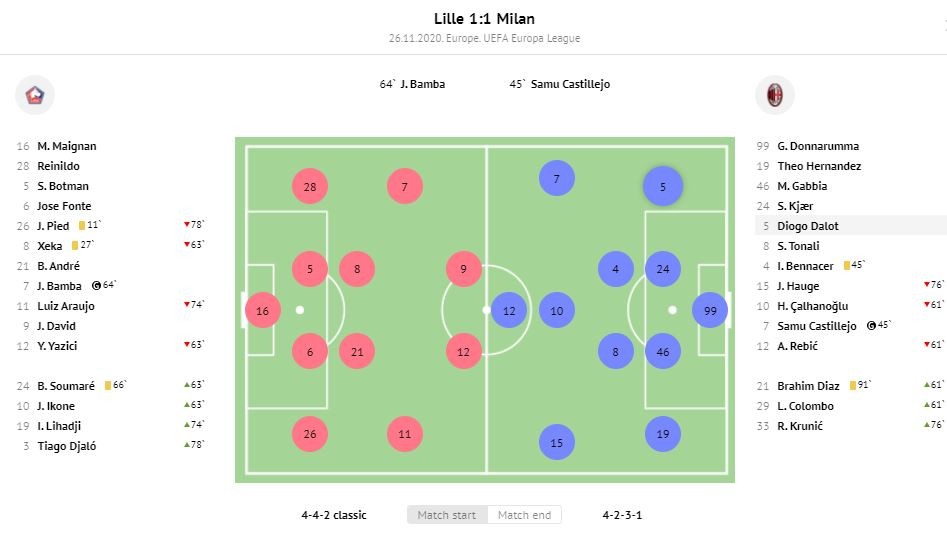 Let's try to break down their methods...

On the offense, Lille ostensibly set out in 4-4-2 formation which can change in an instant. They work the wings beautifully with the wing backs, in particular the right back, pushing up to provide more presence in midfield and even in attack. As the wing backs push up, the wingers are freed up to move inside and support the forward line.

Mobility and variety from 4-4-2

From a goal kick, they position themselves to build an attack. The central defenders open and both wing backs go long. The midfield is staggered into two lines and one of the wingers comes inside to offer passing opportunities whilst the other stays wide to provide depth. The forwards drop back to receive the ball in a more central position. From here they play the short game to advance up the field, predominantly on the wings, but, at the same time, they leave themselves the opportunity to play the long ball.

Exiting with the ball from a goal kick

When it comes to playing long from a goal kick, keeper Maignan is accurate in his passing, more often than not finding the feet of centre forward Yilmaz, who receives in space and battles towards the goal.

Huge boot up the park from keeper Maignan

The concepts of width and depth are important to Lille’s game and, regardless of the game plan, they can dominate in this respect, with left back Bradaric often running the wing and the wingers, Lihadji, Araujo and Bamba cutting into the box to amplify the presence in the opponent’s area.

At the same time, we should highlight the mobility of the forward line where the wingers can pop up between the lines of an opponent’s defence, either to receive the ball or to pull a rival player towards them, freeing up space for the centre forwards who work in tandem, one in a supporting role and the other trying to get into a goal scoring position.

Getting a lot of players between the opponent's lines

Lille’s verticality and ability to reach the end zone are unarguable. This is a team with a huge presence in an opponent’s goal area. At the same time, players are not afraid to take a shot from distance, with as many goals coming from outside the box as in it. All of this is reflected in the data:

• Burak Yilmaz is the 3rd top individual scorer in Ligue 1 with 6 goals.

• Yazici is top scorer in the Europa League with 6 goals in 4 games.

Offensive transitions are one of their greatest virtues. After recovering the ball in midfield they run, attack space and play for 1-on-1 situations. Highlighting the wingers in particular,  Araujo, Bamba and Lihadji are lethal in these situations.

Organized and Strong in Defense

Starting from a 4-4-2 in defense, Lille are characterised by their positional marking and zonal work, where they can swing and chase from any zone.

They stand out as a tight and orderly team which tries to close down the central lanes of attack, causing their opponent to carry the ball out wide.

To do this they close up shop and apply high pressure on their opponent. The forwards are the first line of defense with one taking on the opposition centre back and the other marking the sweeper, forcing the other team to push the ball out to the wings where Lille’s wingers apply more pressure.

Closing down to pile on pressure, forcing ball wide

Pressure applied may depend on the opponent. They can either start from ¾ position or apply intense high pressure during which they leave the opposition winger furthest from the ball free whilst marking the pivot with a winger or central midfielder.

Pressure orientated to the wings

This is a team that knows how to control the rhythm of a game, knowing when to apply high pressure and when to sit back and spread their passes. They know when it’s time to get to work or allow the opponent some possession.

• Variety and versatility, they show great knowledge of the opponent and their weaknesses and try to squeeze them out of the game. In turn this offers a wide range of possibilities in attack.

• The verticality and speed of their attacks. They demand a high level of concentration from an opponent otherwise they can be lethal.

• Dominance of the rhythm of the game, alternating pressure with withdrawal in defence.

• The high work rate of players in both attack and defence

• The differing profiles of the entire team which includes seniority, youth, speed, experience, ambition, talent and work rate. This makes the team extremely complete and competitive.