Spain’s hyper-competitive second division is our destination for this week’s spotlight on the analyst, where we meet Mikel Gandarias, tactical analyst for high flying Recreativo de Huelva.

Following a run of 22 games unbeaten last season, Recreativo are a team with a strong tradition and absolute determination to return to Spain's top flight.

When and how did you discover Nacsport? When did you start using it? Did you use other software before?

I have been working in video analysis since 2009. Originally I was just recording videos of rival teams or our own matches. We used MovieMaker or iMovie to edit and hand wrote the analytical content.

I first used Nacsport in 2011. At first just for analyzing games, but since 2015 also when I teach on the subject of technology in sport.

What parts of the club use Nacsport?

At this time we don’t have a defined Analysis team, but several of the younger teams began using Nacsport in the 2018/19 season. And of course, the first team use it for every game.

Around 4-5 each week, including opponent matches and our own games. 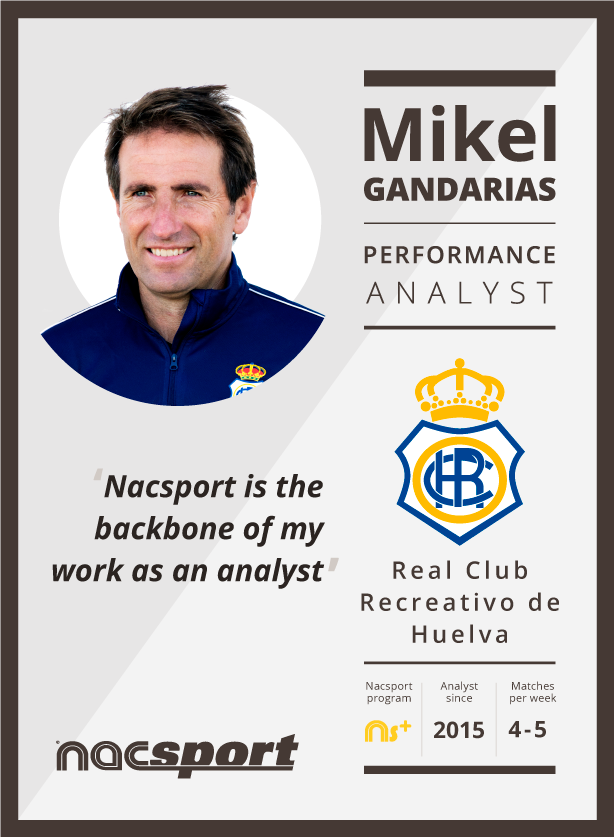 How do you use Nacsport? Tell us about your typical analysis?

As I said before, Nacsport forms the backbone of my work as an analyst.

I use it for both tactical analyses of upcoming rivals and to study our own team, where we try and improve tactically on both an individual and team basis.  One specific area we’ve focused on over the last year is goalkeeping.

In short, it’s our go-to tool for any kind of player or team data at Recreativo de Huelva.

With our work on opposing teams, we place a lot of emphasis on attacking play - how they move the ball, how attacks break down, key players and the areas they like to play in. And we’ll often do the same for defense, watching team structure, the zones different players occupy, their physical strengths and weakest areas.

Do you work in real-time? If so, what kind of information do you share and have you seen any benefits?

From last season we work in real-time at every home game and several away matches.

For a large part of that, I was using Nacsport Elite, sharing clips and important moments with the bench via their phones or tablets. At half time, I'll present a very short report to the players - only mentioning key moments or tactical ideas. And of course, this work has benefitted us. Having the ability to easily share with coaches - and even the players - is a great help.

How many analysts do you work with and how do you share your work?

During the 2018/19 season, all analysis at the club was carried out by myself and Pablo Herrero (Assistant Coach). We shared the task of creating reports, although I was mostly responsible for rival team analysis and working in real-time.

My reports are always made available to the coaches by Tuesday morning.

How do coaches work with your analyses and presentations?

From the beginning of last season, we tried to organize this better. I would send my reports to the coach on a Tuesday and once he’d read through it we exchanged ideas - especially regarding upcoming opponents - then for the rest of the week, we’d use that information in training to develop ways of countering their threats and attacking their weaknesses.

The coach, José María Salmerón, would watch my reports first and after signing off on the content I would then present them to playing staff. We tend to keep reports on our opponents separate to avoid overloading the players.

Do you focus on any particular area of ​​a match to analyze?

When we study opponents I have a strict system, beginning with a general structure of the team, followed by first full viewing of the game, where I make notes on offensive or defensive aspects I think are important.

From there, I may watch another 3-4 games featuring the same team looking to reinforce my ideas, find common traits in their performance, patterns of play and anything I think could be used to our advantage.

I do make similar analyses of our own team, but it’s usually tighter and often features players, actions or tactics that we’re continually working on improving at the club.

How do you think the team benefits from your work? Are there long-term results?

There are undoubtedly benefits to analysis. In the short term staff and players have immediate access to their actions - from both games and training sessions - which we think is important.

Medium-term the squad can see a link between your work and what’s happening on the pitch or in successive games. The best feedback comes players, who are invariably thankful for the information they receive.

Coaches can take advantage of this work and as an analyst, whose job it is to help the first-team coach, that’s ultimately my responsibility.

Do you reach your analytical goals? What would help you be more effective or what frustrates you most about your work?

Over the past season at Recreativo we’ve achieved all the objectives we’ve set for ourselves. Results have been magnificent, reinforcing the work of all of us. And as we operate collectively I can say it’s been a collaborative success.

#What would really help us is to have more staff - and a broader structure. Modern football is demanding and the Spanish second division is very competitive. Investment is tight, so it’s very important to master as much of the important stuff as possible quickly.

Personally, I would like to have a more advanced version of the software, but my only real frustration is time - most notably the time to perform more thorough analysis on our rivals.

Naturally, I use other tools to enhance my reports, especially KlipDraw to add some color to my work and help players understand different options or possibilities.

I also use the Tag & View application. That certainly makes my job a lot easier when I'm watching a live match. I plan to use Sharimg at some point - to share my work with players and coaches - as it seems like a very simple way to reach all of them quickly.

Do you use external data providers? (InStat, WyScout, etc.)

Yes, in the Second Division we have access to Wyscout, which is very useful for us, providing lots of information on other teams. I also have an account with Instat, which helps me collect even more information.

How do you see the development of the role of analyst in football?

It’s a position that’s growing in strength all the time. As football is a team sport, involving a large number of individuals, it lends itself to analysis - so the position is here to stay I believe.

Many teams now have analytical departments with 8-10 staff, specialists who work alongside physical trainers, physicists, specialist coaches and nutritionists. With so much detail to be assessed the role is here to stay.

If you could add a new tool or feature to Nacsport, what would it be?

Nacsport is constantly evolving and getting better, adapting to the needs of the people using it. In terms of detail, I would love to have more options for editing headers, accompanying texts etc.

With KlipDraw, I’m eagerly waiting for the next update and new ways of tracking moving objects and images.