Our first trip to Argentina for this episode of Analyst Spotlight - to visit analyst Facundo Juárez of Super Liga team Gimnasia y Esgrima.

Splitting his time between soccer and field hockey, Facund is a pioneer of performance analysis in Latin America - and has a new boss who you might just recognise!

How did you discover Nacsport and when?

I started using Nacsport in 2012 on the recommendation of Rafael Micheli and Carlos Janeiro in Argentina.

What attracted me at that time was the possibility of having two individual licenses - one each for the clubs I work for. I began with hockey, where budgets are much lower than soccer, and purchased a Basic license.

As we recognised the benefits we gradually upgraded our level of license, so today I’m using Nacsport Elite for both roles.

We tend to need more with football, so I also use the Tag&View app and have added Sharimg - which we use mostly with the hockey side of things, where we get less time to spend with the players.

Between football and hockey I’m probably looking at as many as 15 games per week.

With hockey we’ll analyse our own games - for the men’s and women’s A and B teams - plus at least one match from each upcoming opponent.

For football I’ll copy that routine, but - depending on the competition - I may look at up to 3 matches from our rival.

If I have any time left over, I also analyse the youth team games. So yes, up to 15 games per week is not unusual. 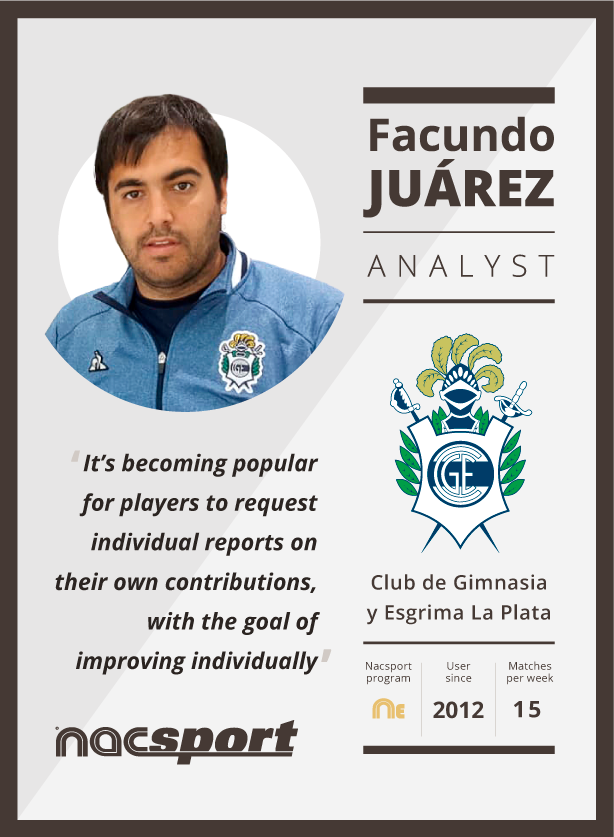 What does a ’typical’ analysis involve for you?

How we analyse rival teams and what we look for varies according to the team. And coaches will often ask me for specific insights depending on who we play.

Typically, in our rival analysis I will look for their strong points, how they attack, how they work set-pieces, how they defend - and how they concede goals or react under pressure.

I’ll focus on their weakest areas, the spaces they leave unattended for example, as well as situations they’ll repeatedly create when attacking. And I’ll do this part of my work together with coaches - who’ll often know more about the club we’re analysing than me.

Tell us a little about your analytical work in real-time?

I’d been doing this for some time, for both sports.

But ever since the rules changed in football, allowing us to share data with the bench, I’ve begun working more closely with the coaching staff during a game, feeding them data as I notice it - often using information to answer direct questions they ask during the play.

Hockey has a stronger tradition of real-time analysis. We’ve always shared huge amounts of information with coaches throughout a game.

We use an iPad on the bench, so I can instantly share data regarding things like short corners or attacking strategies.

With the football side of things, even before the laws changed, we were analysing in real time at Gimnasia y Esgrima. But whereas I can now communicate with coaches during periods of play, before I’d have to wait for halftime to share important observations.

Having the ability to send our messages to the bench during a game has really benefitted us as a team.

The other great advantage of analysing in game is that it reduces what I need to do post-match and cuts my workload - although I’ll normally review those games in more detail anyway.

Read interview with soccer coach Maxime Chalier on how he uses Nacsport.

At Santa Bárbara (hockey club) I work entirely alone, which is good because I’m a close friend of the coach and we have a strong working relationship, based on our knowledge of each other’s methods.

I’m also the only full-time analyst at Gimnasia y Esgrima, but I work closely with two of the coaches. During a game, I'll be looking for ways to improve performance in real-time, while they take a broader view of the whole match.

Afterwards, we’ll come together and collaborate on a report for the team.

How do coaches work with your reports?

We have a system that works very well for the club (Gimnasia y Esgrima). I’ll create my report of the match based on what we’ve collected during a game and then collectively the 3 of us will decide on a focus for the presentation and what should be included.

How do players react to your work?

The players have always taken it very well. They know our goal is to improve overall performance, rather than expose individual weakness - and that everything is done for the good of the team.

In fact, I’ve noticed across both sports that it’s becoming popular for players to request individual reports on their own contributions, with the goal of improving individually.

So if there’s any criticism from the players it’s about their own contribution not mine.

What other tools do you use for your analysis?

I use KlipDraw to create highlights within videos which the coaches will focus on in their briefings with players. Because we’re often pushed for time, having graphics over our videos can also serve as a memory aid to coaches too.

Aside from that, using KlipDraw also means we no longer need to use things like laser pointers or to stand right in front of a screen and point at things.

Only Santa Bárbara is working with Sharimg at the moment. Despite their amateur status, it’s proved worthwhile because we don’t get much coaching time with the players. And when we do, it’s preferable to be practicing our skills to sitting around a TV screen or computer.

Sending players my analysis via Sharimg allows them to watch it in their own time before we discuss it collectively in a meeting. And because it’s easy to add comments and communicate inside Sharimg, it allows us to do a lot of important work remotely.

I think I was lucky to start working as an analyst a long time ago, so I’ve had a chance to watch it evolve over many years.

Along with the discipline itself, the software has changed so much over the same period and that in turn has helped define the role. Nacsport is not the same today as it was back in 2012.

In Argentina today there isn’t a single club in the top 2 divisions without at least one analyst and that wasn’t the case when I began.

Even in hockey, which enjoys much less funding, you will struggle to find a pitch without a filming tower to record matches.

Have you noticed any differences between video analysis in South America and Europe?

I think mostly it’s a question of timing. While analytics is very well established in Europe, it’s less popular in South America, although that’s changing all the time.

In terms of infrastructure Europe is better equipped. It’s rare to find a European stadium without space set aside for the analysts. In South America it’s not.

And then there’s the software. In my experience, when you arrive at a European club it’s quite normal to find they already have their own license for a tool like Nacsport. It’s one of the accepted tools of the trade.

In South America the attitude is still a little behind that - you may need to justify how software can improve a team.

What other equipment do you use?

I use a camera and tripod to record games - for our real-time transmission - and a router to send my work to the bench.

In training, we use a drone, which I find really useful. What makes it so well suited to analytics is that we can fly where we want, record video from exactly the right height and from precisely the angles that offer us the best views.

In short the drone offers us something that traditional video recording of games never can. As an analyst I know it can give me a much better view than TV ever could.

The drone hasn’t worked as well for hockey. Because the ball is much smaller it can be difficult to track its movement. It’s definitely better suited to football.

I’ve seen the new automated camera and recording systems coming on to the market, but I’m not sure how much more they could help me at the moment.

Recently football legend like Diego Maradona took over as coach with the team. How does it feel working alongside one of the greats?

We continue to place a real focus on video work and obviously, having him around has been a real plus, especially as he takes a personal interest in what I'm doing.

If you could add one new feature to Nacsport, what would it be?

That’s difficult because I find it a very complete tool already.

But I say that as a Nacsport Elite user - and it could be that analysts working with cheaper versions of the software have a different opinion.

I also use Tag&View - which plays very well with the main software. So again, while I don’t know how that synchronisation works with other versions of Nacsport, I can say it’s perfect for me.

And you’re constantly coming up with new features that I’d struggle to think of myself. Like the addition of pattern recognition in your last update.

Hockey or football - we think you’ll find Nacsport is the perfect tool to help your team perform better. And with prices starting at under $200 you can be sure there’s a Nacsport software to suit your budget.

Click here to try any Nacsport product FREE for 30 days.